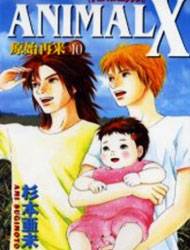 27 year-old Ayukawa Yuuji has never been much of a man. He's more comfortable sewing than fighting, he faints at the sight of blood, and his fiancee is tougher than he is. He's also a terrible pushover. So when his boss at the medical lab volunteers him for some experimental drug therapy, how can he possibly refuse? All's mediocre for Yuuji: master of the pathetic. Mediocre, that is, until a juvenile mass murder suspect jumps out from under Yuuji's bed, declaring him his "mate." Before Yuuji has time to argue, the stranger transforms into a 16 foot-tall dinosaur and beheads his roommate... Yuuji suddenly finds himself the sole target of a lost race that turns into dinosaurs, an extremely scary woman with a Goddess-Complex, the yakuza, a mad scientist and one 17 year-old boy who really, really, really wants to sleep with him.Series:1. Aragami no Ichizoku (4 volumes)2. Daichi no Okite (2 volumes)3. Genshi Sairai (10 volumes)
Subscribe Chapter list