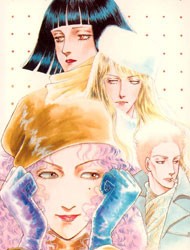 Shochikubai Miroku is the son of a police commissioner (father) and also a traveller (mother). Miroku has lots of connections and is a very good fighter. His interest is his motorcycle. Kikumasamune Seishiro is the rich son of a large hospital. He also fights as well as Miroku. He is a good fighter with smarts. Bido Granmarie is the son of a Swedish ambassador. He's also a playboy, dating many girls at once. Granmarie can't see himself going steady because he thinks the world can't handle it. Kenbishi Yuri is the rich daughter of a world-renowned president of the Kenbishi Business. She loves to indulge on eating. She's also a good fighter, but can never beat Seishiro. Hakushika Noriko is the daughter of a famous japanese painter (father) and her mother is from a tradition tea ceremony family. Her only hate is men and can get very violent when they touch her. Kizakura Karen lives with her mother, a rich jewel dealer. Her dream is to marry into a rich family using her attractive body and style.
Subscribe Chapter list